I found a dewy spider’s web, hidden and protected under the boughs of a tree and softly back-lit by the rising sun.  I was surprised – captivated by the pageantry.

Here’s the thing, though.  I often struggle with what I know, the science of things.  Science has its purpose, of course, and I’ve made my living in that world, but it tends to take the wonder away, shining a harsh light, callously dissecting and categorizing nature.    Looking at this fresh dew, I try to focus on its clean sparkle, its wetness, its perfect roundness.  Dew is visually stunning and any thoughts of dew point or surface tension kill the joy.    The same goes for the cypress tree that protects this spider’s web and that is clothed in the morning dew.  It is delicate, lushly green and stately.  The tree has a scientific name – Taxodium distichum.  With all due respect to Linnaeus and his nomenclature, how about something more poetic or memorable, or perhaps no name at all?

I suppose it matters very little what we call the tree, as long we are able to fully experience it.  In the words of Romeo’s Juliet – “that which we call a rose by any other name would smell as sweet.”

As I peered through my viewfinder and telephoto lens to make this image, I felt my pulse quicken.  I was looking into this gator’s eyes.  He is massive and from this perspective looks ready to lunge forward, legs tense and eyes alert.   In fact, though, this gator is behind a fence in a wildlife park.  He and his fellow pond-mates are overweight and pretty lazy.  One rarely sees them move at all.  So any real fear was in my mind and was about expecting the unlikely.

As grown-ups, our fears are no longer about monsters and bogey-men coming to get us but they are still about expecting the unlikely – getting laid off, losing one’s home in a hurricane or tornado, running out of money, succumbing to early-onset dementia, and more.  Wouldn’t it be grand if we could live our lives completely free of fear? 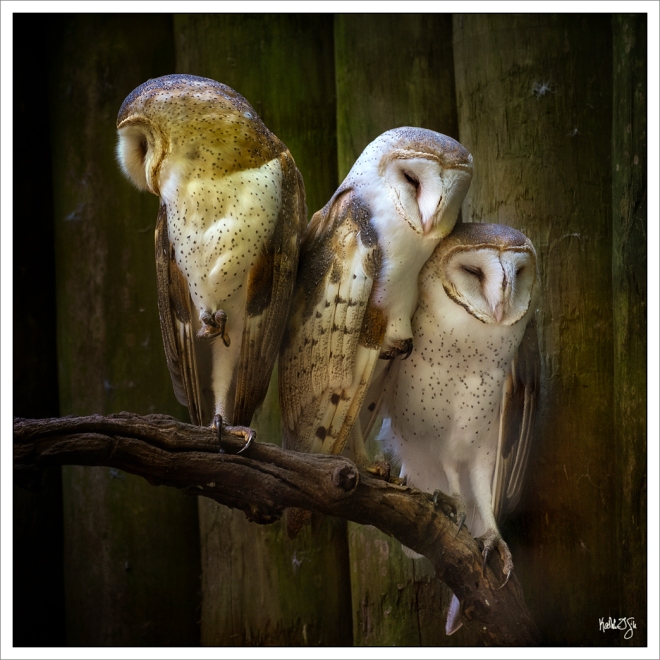 These three barn owls that live at a local wildlife park drew my immediate attention.  I think it was their collective gesture, the familiar and comfortable contact. But it was also their “three-ness”.

To many of us, primary numbers can have meaning, sometimes many meanings. For me, though, the number three has always and only been associated with a singular magical truth: I was one of three children, all girls.  Interestingly, being one of three sisters made us each feel special.  There were, of course, the inevitable and tired comparisons, but even that was its own form of cherished attention. There was a general feeling of completeness, a sense of a matched set – each unique but part of the whole.  Each refining her own role and identity in the set – oldest, middle, youngest.

We lost Sally, the middle sister and probably the most complex in our set of three, a year ago this week.  I dearly miss her, every day, and the owls reminded me of that hole in my heart where the three-ness used to reside.

It is Easter Weekend and here in Florida it is the peak of “the season”.  That is the term for the perfect storm that happens when all of the winter residents are, indeed, in residence and when most of the other folks who live north of the Mason-Dixon Line, and who are bone-tired of winter, boogie south just as far as their vehicles will carry them.

I have been out and about today, preparing for an Easter Sunday entertaining family and friends, and predictably found myself in the thick of this frenzy.  The short-term population boom was obvious, even in our little fishing village.  Highways clogged with motor homes festooned with bicycles and towing automobiles behind, like little cabooses, and small sedans laden with kayaks and kids’ floats – the scene reminiscent of a certain Chevy Chase movie.

I’m not sure if there is an official “Easter season spirit” like there is for the Christmas season, but if there were such a spirit, it would surely involve empathy and gratitude.  So I’m being empathetic (these people have suffered through a horrendous winter) and grateful – that apparently the US economy and Florida’s most important industry have both recovered.  It’s like old times.

Happy Easter/Passover to all.