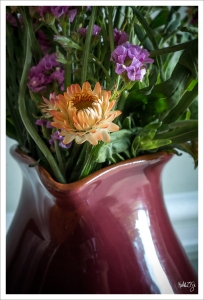 My mission at the farmer’s market last Saturday was tomatoes, which are now, and finally, in season.  However I paused in front of a booth devoted to garden flowers, admiring the variety and freshness of the flower lady’s colorful stock.  She told me that she keeps cut flowers healthy in her home for as long as a week by simply tending them daily. That I believed without question. She also said that strawflowers make great dried flowers and that these would be an interesting color once they opened.  I just had to trust her on that one.   I bought $6 worth of her blooms, selecting three different varieties, and she made them into a bouquet for me.

I had no idea if these flowers would make it home in the hot car, and I suddenly realized I didn’t even have a proper vase to put them in once I arrived there. As I paid her the $6, I asked her if I could leave the bouquet there with her, wrapped in wet newspaper stuck in a bucket of water beneath her display table, while I solved this problem.

Off I went to a nearby flea market to find a vase, tomatoes all but forgotten.  Mind you, I was fully aware of my 2015 commitment to cull – to simplify my environment – which in part means to only buy something if it is either exceptionally beautiful or useful, and to pay as little as possible in the process – value spending.  A vase is useful, but at what price? After the better part of an hour in the shop, I finally settled on this ceramic pitcher, which I loved all the more because of its $8 price tag.

I have carefully tended these flowers for five days now, following the flower lady’s guidance. The flowers and their vase give me great pleasure, of course, every time I enter the room where they reside.  Most importantly, now I have even more incentive to return to the market and thus give the vase its raison d’etre.

I am a semi-professional photographer, with the passion of a true amateur, drawn primarily to nature and travel, but open to and intrigued by most everything. In 2014, I began working on a 52-Week Photo Project, posting one photo a week that expressed something about that week – a theme, a story, a feeling. My intent was to add an element of story-telling to my work. That project was successfully completed in September 2015 and is all stored in the archive here. After a several month break, I began a new 12-month project. Each month in 2016 I will present a group of carefully curated images – a sort of thematic portfolio – along with an essay. My intent is to improve my editing skills and, of course, motivate me to keep on shooting. Please follow me and let me know what you think. You can see more of my work on my website: www.kathleengillphotography.com. View all posts by Kathleen Gill