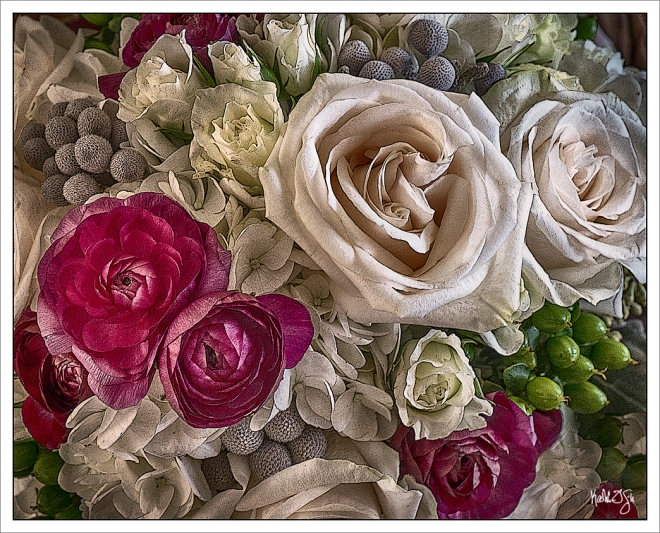 Yesterday, while culling through photographs from our son’s recent wedding, I suddenly realized that November 29 is my parents’ wedding anniversary.  That thought has not really been all that significant to me in the past, but I guess it now had context, given what I had just been part of.  That set me to thinking about what that day in 1947 was all about.  So, I called my 89-year-old mother to ask about the details.  She was, of course, happy to oblige.  After all, how often is an 89-year-old widow specifically asked to reminisce about anything, let alone a wedding day 68 years ago?

We have a few photographs from that day – smiling faces frozen in time.  I know that my mom and dad were married in Old Saybrook, Connecticut, at St. John Catholic Church.  Those photos were taken after the ceremony and in front of the church’s big red doors.  My dad wore a 3-piece suit, a red tie and a fedora; my mom wore a dark suit and wide-brim straw bowler and carried a big bouquet of flowers.  Both looked radiant.  But that’s about all I knew.

This was the most exciting day of my mom’s life.  On the day of the wedding, my dad and his widowed mother drove to my maternal grandparents’ home in Fort Lee, New Jersey.  Then the five of them – mom, dad and my three grand-parents – all drove to Old Saybrook in George’s big sedan, where they met up with siblings from both sides of the family and a few friends.  Mom recalled that they had to stop on the way to pick up her corsage – a seemingly insignificant detail that has stayed with her for almost seven decades.

My uncle Gene was my dad’s best man, and my mom’s best friend Mary McConnell was her matron-of-honor.  Afterwards, they all went to Casa Mana Restaurant in Teaneck, New Jersey, to celebrate.  I looked that up on Google – it was apparently a very popular place in the 1940s and 1950s.

Mom and Dad set up housekeeping in an apartment in Hackensack.  Rent was $50/month.  Dad was working as a security guard for a trucking company at $50/week, a job that my grandfather secured for him.  Her parents gave the newly-weds a bed, a table-and-chairs and a television to get started – along with a set of good china, which was their “official” wedding present.  I picked up an identical set of that china in an antique store in Roswell, Georgia, in 1995 and I believe with all my heart that it is the same exact set, chips and all.  Anyway, my mom took a job at Oppenheimer Collins department store.  They didn’t own a car, so she had to walk to work – rain, shine or snow.   But she assured me that they were deliriously happy.   They didn’t have much, but they went dancing on Saturday nights, enjoyed 10-cent beers, and planned their lives together.  Simpler times, eh?

I am a semi-professional photographer, with the passion of a true amateur, drawn primarily to nature and travel, but open to and intrigued by most everything. In 2014, I began working on a 52-Week Photo Project, posting one photo a week that expressed something about that week – a theme, a story, a feeling. My intent was to add an element of story-telling to my work. That project was successfully completed in September 2015 and is all stored in the archive here. After a several month break, I began a new 12-month project. Each month in 2016 I will present a group of carefully curated images – a sort of thematic portfolio – along with an essay. My intent is to improve my editing skills and, of course, motivate me to keep on shooting. Please follow me and let me know what you think. You can see more of my work on my website: www.kathleengillphotography.com. View all posts by Kathleen Gill